©2013 Photographed by: Fabie de SilvaBorn in Baguio City, Philippines 1941 – right in the middle of World War II was a rough beginning for his parents whose plights just to avoid the Japanese Imperial Army were enough to make anyone wonder how one survives. His...

Some early photos of Bueno Silva 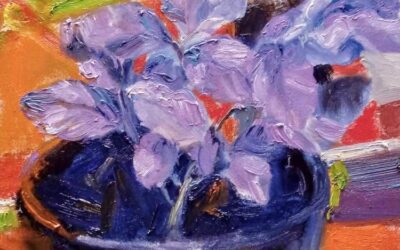 Petals in Violet by Bueno Silva

Petals in Blue by Bueno Silva 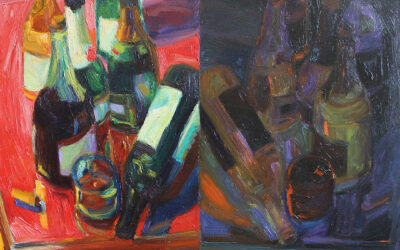 A Filipino impressionist in America

Bueno first discovered his talent for the arts during his schooldays at Bautista Elementary School in Pangasinan. He loved imagining images of animals, flowers and spent much time copying the pictures of Filipino heroes from books and proudly showing them to his teacher and classmates.

While pursuing his college degree, Bueno continued his hobby, using mediums of charcoal, watercolors and colored pencils. It was also at this time that he began accepting commissioned works of portraits, which greatly helped to answer for his daily expenses and pocket money.

Bueno shares, “I am so sure that I got my artistic bent from my father. So dedicated was he to the visual arts, he would even continue working late during the night inside his mosquito net. It seems that his interest was cut off as his father disliked it and the family advised him not to continue because according to them, there was no financial future in art. I think that this way of thinking left an impression on him because my father would tell me that ‘unless you are Amorsolo or Luna you cannot be an artist.’ This did not discourage me though.”

He adds, “My wife Patria and I moved to Sacramento in California and I continued painting. In November of 1979, I was offered an Honorary One-Man Art Exhibition to the US, sponsored by the Philippine Consulate General in San Francisco, California. Through their auspicious support, my exhibition was so successful and that was the start of my colorful stint in the US.”

When asked about his most memorable works, Bueno had much to share. “First memory that comes to mind is the portrait of Pope Paul VI in 1970 that became the cover of all magazines in the Philippines during his pastoral visit. This painting was brought to the Vatican as gift from the Philippine government. My second memorable work was unveiled in November 1979, for the former Mayor of San Francisco, California (now US Senator) Dianne Feinstein. Feinstein attended the opening rites of my One-Man Show that was sponsored by the Philippine Consulate General through the assistance of Consul General and Ambassador Romeo Arguelles. It was especially unforgettable because former Mayor Dianne Feinstein was so overwhelmed that she embraced and kissed me after she unveiled her oil portrait. My third special painting was a painting of President Ronald Wilson Reagan in Sacramento, California. The Republican camp helped me with the late Assemblyman Paul Gann and the full assistance of Assemblyman Daniel Benvenuti who have produced the reference photograph of President-elect Reagan. The press heralded the painting as a very lifelike image rendered by a popular Fil-Am. I was proud of that description.

“Last but not the least was my painting of the late Gen. Paulino Torres Santos (whose birthplace was Anoling, Camiling, Tarlac. He was the chief of staff of President Manuel L. Quezon during the Commonwealth of the Republic of the Philippines). My reference was a blurry picture based and published in the Philippine Free Press magazine dated May 16, 1936. I started the painting in the middle part of 2002 and finished in January of 2003. Everyone who saw my painting of the General was so surprised with the results. It was unveiled on March 7, 2003 in Gen. Paulino Santos Museum in General Santos City. My painting of Gen. P. Santos became so known that it was published in newspapers and magazines such as Panorama.”

Bueno has a special fondness for the works of the Fauves Movement popularized by Henri Matisse, Andre Derain, George Braque, Maurice de Vlaminck, Friesz and Manguin.

When not painting, Bueno practices the art of tai-chi exercise and has done so daily for more than six years. He still brings his wife to her work before 3 p.m. and gets back home at 3:30 p.m. Being close to Lake Michigan, he enjoys some leisure hours as he communes with nature.

To budding artists, this great painter imparts this message, “When painting or producing your artwork, be sure to consider a great dedication of your mind, body and soul. About your artwork; no matter how small or large or as a gift…. your works should be treated that well. Don’t make excuses…. Be yourself! Don’t rush your work, always simplify your compositions. When someone criticizes your work, be gracious enough to accept counter impressions. The viewer’s eyes are comparable to thousand of critics. If the criticism doesn’t do justice to what you are worth, just be thankful because they cared enough to share their views. Of course, you are the author of your work and you know what you are doing. At the end of the day, the destiny of that work is literally in your hands! Lastly, don’t be shy to ask questions from other artists regarding the how and why of the art world. These are absolute questions that not all professors of the art can advise you.”

In spite of years away from his homeland, Bueno still speaks passionately about the Philippines. “I embrace being a Filipino with my whole heart and soul. I still consider myself very Pinoy! Sapagkat kayo’y aking mga KAPUSO!” Through his impressive works, Bueno Silva has made Westerners take notice of what a Filipino artist is capable of. He does his country proud! Bueno!

By Bueno Silva Study Only 2

By Bueno Silva Study Only 3